Why pray for Aliyah?

Many people wish to pray for Israel, but don’t know how. We believe that we must pray according to God’s Word. One of the most repeated topics in the Scriptures related to Israel is the return of the Jewish people to their land. We can find more than 160 passages regarding this subject.

In Hebrew the word used for the return is “aliyah” which means ascent. Always in the Scriptures when referring to the pilgrimage to Jerusalem the words used are “going up to Jerusalem”, as it is situated on the mountains. Why should the Jewish people return to their Land?

First we must understand why the Jewish People left the Land of Israel. The land was given to Abraham and his offspring, but God warned Moses that if the People would not submit to their Creator they would be uprooted from the land.

“And as the Lord took delight in doing you good and multiplying you, so the Lord will take delight in bringing ruin upon you and destroying you. And you shall be plucked off the land that you are entering to take possession of it. And the Lord will scatter you among all peoples, from one end of the earth to the other, and there you shall serve other gods of wood and stone, which neither you nor your fathers have known.” Deuteronomy 28.63 .64

This happens because God is holy and dwell in the Land. If it is contaminated in a measure above His mercy, the people are “vomited out”.

“For the Lord has chosen Zion; He has desired it for his dwelling place: This is my resting place forever; Here I will dwell, for I have desired it.” Psalm 132.13 .14

On the other hand we see that there is a time of exile to be fulfilled. The Babylonian exile lasted 70 years. After that period of time the people should have returned. In the time of Esther, some Jews remained in Persia after God’s call to return to Israel. We can attribute the persecution by Haman to the fact that the people have refused to return to the land, disobeying the Father’s call to dwell together in His holy place. When the Jewish people did not recognize Yeshua as Messiah there was another exile and that one lasted almost 2000 years! A little before the Holocaust happened, some prophets warned the Jewish people to return to their Land, declaring that if they did not obey there would be a great destruction upon the people.

“Whoever of you will escape from the catastrophe, he or she will live to see the exalted moment of a great Jewish Wedding: The rebirth and the rise of a Jewish state, I don’t know if I will be privileged to see it: my son will! I believe in this as I am sure that tomorrow morning the sun will rise.”

Ze’ev Jabotinsky quotes in the beginning of the Holocaust, in 1937 and 38.

Shortly after the end of the Holocaust (1945), in 1948 the State of Israel was restored and many have gone back since then. However there are still many Jews in the diaspora.

See in the chart below from 2018: the number of Jews living AROUND THE WORLD. In the United States it is still almost equal to the number of those living in Israel. 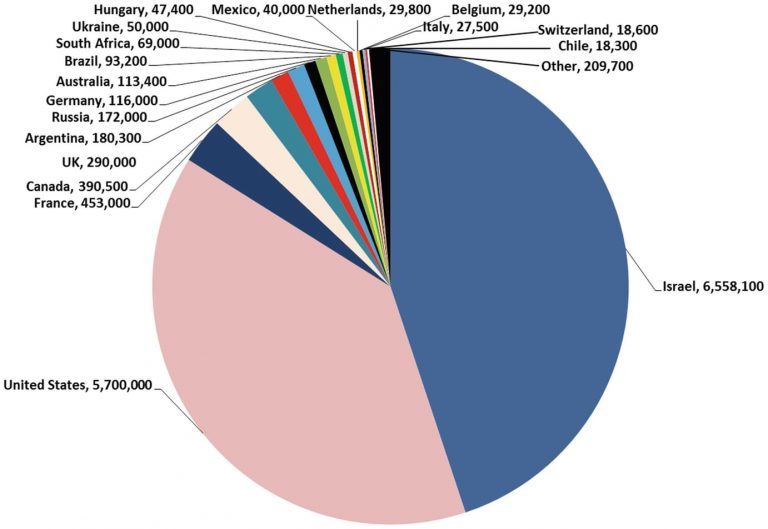 * Israel currently has around 8.5 million inhabitants. The most notable feature of its population is its high diversity. Despite the division of the country’s inhabitants into Jews (80%) and Arabs (20%), there are many other subdivisions.

With recent anti-Semitism in France, many French Jews have made Aliyah.

Pray that hunters will not be needed, but the people will return only with the help of the fishermen:

We understand that hunters are the anti-Semitic, and fishermen are those who in various ways help the Jews to return. You can be a fisherman!

Begin by agreeing and declaring the Word of God on Aliyah. Pray that the ties binding the Jews in the Diaspora, such as financial stability, fear, among others, will be removed and the paths will be opened.

“But fear not, O Jacob my servant, nor be dismayed, O Israel, for behold, I will save you from far away, and your offspring from the land of their captivity. Jacob shall return and have quiet and ease and none shall make him afraid.” Jeremiah 46.27

If you have a specific prayer request for Aliyah, please share and we can be together in intercession at the throne room.